The 8th annual research symposium organized by Oromia State University was held on June 28-29, 2019. The theme of the symposia was‘Public Sector Transformation, Peace and Development’. In the symposium, the university community, officials, scholars from various institutions, and concerned bodies attended the event.

In his welcoming remarks, Dr. GemechuArarsa, President of Oromia State University, revealed the significance of organizing such an academic event in terms of backing the government machinery in its efforts to bring about a lasting peace, democracy and development. Hehasdescribed Ethiopia as a nation plunged in rampant corruption and instability and henceforth research priority areas be identified with the view to seek scientific solutions to curb the aforementioned problems.

Guest of honor, Dr. BikilaHurisa, in his part described the 8th National Symposium as historical in that the conference was organized in such a critical time when the nation is on a crossroad. DrBikila further stated the growing need to transform public institutions and addressing citizen’s quest for quality service delivery. According to him, the development attained over the last couple of years has granted the citizens the opportunity to choose. He also mentioned that papers selected for the symposium are, in one way or another, in conformity with the reform agenda of the government.

The symposium lasts for two days, and eight papers were presented. These are;

After each session of the presentations, the moderators opened the stage for questions, suggestions and comments. In the discussion period, participants forwarded their questions, views and critiques. In turn, the presenters reflected onthe questions, comments and suggestions respectively.

As a final point of the syposium, DrKokobDemeke made his closing remark. He first thanked all the participants for their two days staying in the symposium. In his speech he addressed the commitment of the university in organizing such kind of national symposia and how it is important for the development of the country. He stated that the university has organized eight different research symposia with different themes. DrKokob briefed all the last symposia themes in detail.  He further added that as the university’s directions is mainly on research and consultancy, the university will do its level best in organizing such kind of symposium in the area where gaps are observed, and disseminate the findings. At last DrKokob thanked again all the participants and closed the symposium officially. 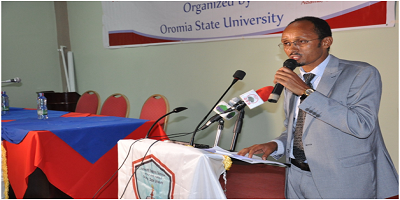